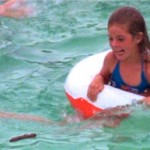 On our family vacation of 1989, as you already know, I crapped in a hotel sauna and then watched some hapless man go inside for just long enough to run out and, presumably, vomit.  Well, that wasn’t the only misplaced turd I left somewhere across the American West during August 1989.  At a motel near Colorado Springs, my brother Kevin and I were swimming in the pool when I had another “rush call.”

Me:  “Um…I gotta crap…like, right now.   I’ll just do it here in the pool.”
Kev:  “NOOOOOO!  Are you sick in the head or something?”
Me (pulling down my trunks and letting nature take its unnatural course):  “No, I’m sick in the bowels.  I’d get out if I were you.”

We found some faded lounge chairs to sit on and watched my turd slowly sink towards the white bottom of the pool, finally finding a resting place near where the shallow end became the deep end.  Only, when three little kids wearing diving masks starting tossing coins into the pool to retrieve, the waves pushed it down the steep drop into the deep end where Future White Jacques Cousteau was about to dive.

Future Jacques entered the water, swam towards the shiny copper, but diverted his course when he noticed my log.   A few seconds later, he was motioning for his siblings to come join him:  “Hey you guys…come look at this!”

They all dove to the bottom towards the poop. Kevin and I watched through the water as they poked at it with their fingers and talked amongst themselves.

“Daddy, come look at this thing!” the youngest yelled to a man reading the paper on the other side of the pool.  He got up and climbed down the ladder into the water.

Daddy swam to the bottom to examine my creation, picked it up, and quickly returned to the surface, setting the poo on top of the filter cover.  “Son of a–.  Who crapped in the pool?!”  He stared at the other hotel guests, who were all climbing out of the water as if its temperature had increased 100 degrees.

I knew I couldn’t look at Kevin, so I bit my tongue til I was certain it’d fork and stared at a lamppost in the opposite direction.  Kevin looked at the angry man and shrugged, his right hand covering the wry grin that made its way across his face.  The man looked disgusted, gathered his family, and walked towards the lobby.  As soon as they disappeared, we released our howls.

It was nearly lunchtime, so we headed back towards our room, but don’t think I didn’t grab a leaf, pick up my little sewer bass, and toss him back into the pool on our way out.