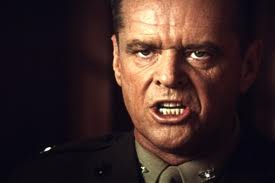 0635:  I check his office as instructed (though a few minutes late).  No sign of him.
0720:  See him briefly in the hall after morning announcements.

Me:  I tried to come by this morning; you weren’t there, but I…
Him:  This next briefing is important, but come to my office right afterward.
Me:  I can’t.  I’m have a physical at 0730 across base.

I spend an hour or so relaying the events of last summer and how I nearly died of an asthmatic attack from allergens the day before I flew to Spain to run with a bunch of wild bovine.  The doctor said I’d likely have to go before a medical board of sorts to see if I can stay in the service or not.

Me:  Because of some allegies?
Military Doctor: It’s not likely that they’ll make you separate…10 years ago, when I was in the Army, as asthmatic attack meant you were out, but that’s unlikely now.  But you probably can’t deploy somewhere dusty.
Me:  That pretty much eliminates every “hot spot” in which we’ve deployed troops since Vietnam, doesn’t it?

I go back to our building and into the commander’s office.  Empty again.  Go about my day.  See him briefly after the day’s last briefing.

1615 (15 minutes after the Bama-Georgia game has begun and I’d expected to be home):  I try to enter his office.

Him:  Go see if Major Devall and Lt Colonel Jay are available.

“That’s odd,” I think as I text the Major and ask him to come up from the office we share downstairs.

1620 (20 minutes after the start of the Bama-Georgia game I really wanted to be watching at home by now):  The 4 of us enter his office and shut the door behind us.

Him:  I gotta tell you…I am not happy.
Me:  Well neither am–
Him:  (starts reading my emails from the previous week, which he’s printed out)
Me:  I’m actually pretty well aware of what I wrote and don’t need you to–
Him:  (begins yelling at me about how sure he is that my previous squadron commanders did not allow members to miss a “freebie” drill weekend of sorts each year)
Me:  That’s not correct–
Him:  So you’re calling me a liar?
Me:  No, I’m identifying an incorrect statement you’ve made.
Him:  I don’t like your tone.  And I don’t like this bantering back and forth you seem to be unable to stop doing!
Me:  “Bantering” is playful back and forth conversation, and I don’t think this talk would–
Him:  Enough!  You broke the chain of command and made travel arrangement without permission when–
Me:  I did not; I verbally consulted the Major, who was my supervisor before my promotion, and–
Him:  (yells some more and basically indicates there is NO WAY IN HELL there will not be serious repercussions if I skip February drill weekend before declaring that “we’re done here” while throwing in 2 more accusatory jabs that are complete mistruths about persons under my command).

I spring from my chair and power walk down the hall, skipping the unit happy hour we were supposed to be enjoying to drive home and see the football game.  Major Devall and Lt Colonel Jay are requested to stay behind and talk further behind my back as I exit earshot range.

In other news, look how happy I was to get rid of my Movember mustache!  And look how ugly our master bathroom is (until it’s gutted next year)!

Leave a Reply to William Cancel