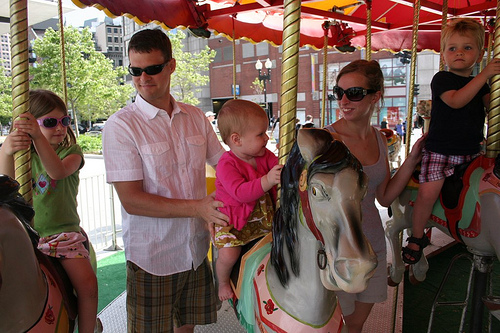 I just had some damned good pie and coffee in Woods Hole, Massachusetts after a day of biking across Martha’s Vineyard.  There’s something tranquil about pulling two fighting toddlers alongside traffic jams and beaches where Jaws was filmed.  It forces going to one’s happy place. After that, we took these toddlers to the oldest carousel in America. 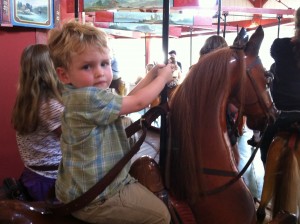 Yesterday, we got up just after 5am, because that’s when the sun rises in Massachusetts, which means it’s the time our 4-year-old and 2-year-old rise in concert, climb up from the basement of the house we’re renting, cross the living room, climb the steps to the top floor, and bust into our bedroom to put knees into my groin with calls of, “IT’S MORNING TIME, DADDY!” which is supposed to mean activities should commence.  Then we put the urchins into strollers and walked the Shining Sea Bikeway, because that’s about as patriotic as this guy can get before breakfast.  After that, a 4th of July parade.  And then a birthday party for Emilie, who says she’s 16. 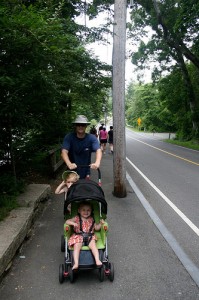 Sunday, we walked to my in-laws’ family’s house on the water for some quality private beach time.  I’ve always wondered what time spent on a private beach would be like.  Is it lonely?  Does one miss the whores?  Well, I was able to get past the dearth of whores and enjoy the tranquility that is a private beach (except for all the children, who are louder than even the worst of whores).  There were good ribs and other blackened meats, and the beer flowed like wine.  A good Sunday. 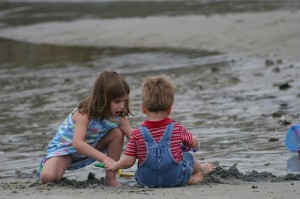 Saturday, I rose from our hotel in Boston, took the subway to the airport to get our rental SUV, sped back to the hotel to put the children and suitcases inside, and then tore off for the 60-mile journey to the Cape.  It was 8:40.  I knew we’d beat all the hung over vacationers headed that way, because we were leaving early, dammit.  Only, we weren’t.  It took over 3 hours.  The bulk of this time was spent waiting to cross the Bourne Bridge. 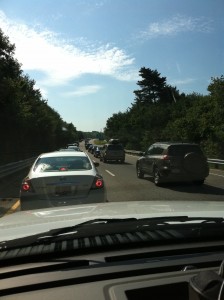 I hate the Bourne Bridge.  Jason Bourne is an asshole.

Friday, we took one of these “duck” tour things where you ride in a vehicle designed by the military to go on land and water while a dude in an afro wig tells you stuff about the city of Boston.  I liked it.  I learned some stuff, like about that time when Boston flooded with molasses.  Seriously.  After the tour, we had a picnic in the Public Garden and, after naps, took the train to Cambridge to see Harvard and where smart people eat and drink. 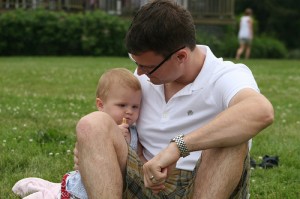 Thursday, we took a walking tour of the city with an Emerson student dressed like she was 400 years old but walked and talked like a college student.  We learned where Sam Adams and Paul Revere are buried.  We found out the benefit of a cricket atop Faneuil Hall.  Lunch was at one of the oldest bars in the country, and I picked up a hat to keep my ears melanoma free.  That evening, I got to enjoy an outstanding (and child-free, thank God), dinner with one of my fellow Dadcentric writers (who had, incidentally, suggested most of our activities for our stay in Boston weeks before we came) and his lovely wife at Mare, which didn’t serve horse, I was glad to learn.  On the way back to the hotel, we thought we’d check out Paul Revere’s house.  He wasn’t home.

Wednesday is when we arrived.  We explored the North End and the harbor after the adventure that was flying with 3 children under the age of 5.  Since there were 6 of us in a hotel with a maximum room occupancy of 5, we had to split up while checking in.  Lola slept in the bathtub.  Owen was in a pack-and-play.  Emilie and Maddie shared a bed.  We used a lot of towels.

To summarize this trip so far, I love summer in Boston.  It’s not in the mid-90s outside, and I love cities with lots of history.  The food is great, and more than one person has been willing to ask me what I’m looking for upon seeing me standing at a street corner trying to find the blue dot on my Google maps app on the iphone screen.  I didn’t know Yankees were nice, but they apparently are!

As for our time on the Cape, it’s pretty, and it can be relaxing at times, but I’m more of a city mouse than a country mouse, so I enjoyed our time in town better (despite the cramped living arrangements).  All in all, though, I give this vacation a hearty thumbs up.  Especially since we’d be unpacking all week if we were at home.

Leave a Reply to BusyDad Cancel