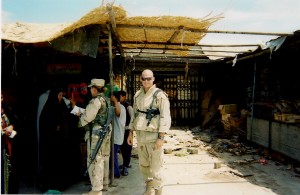 The first time I deployed in support of OIF, Americans were still fairly novel creatures to the regular “Joe Iraqi” townsfolk, as were our beardless faces, our cargo pants, and–most intriguing–our sunglasses.

On one of the two trips I took “outside the wire” while there (both unauthorized), I saw firsthand the perception they had about our sunglasses; before that day, I’d heard rumors about this belief only:

Iraqis think our sunglasses allow us to have x-ray vision.

At least, they thought that in 2003, when we first arrived. So, on June 7, 2003, when I went into a local village to eat a meal that wasn’t packaged 20 years ago, I was bum rushed by a group of middle-aged men who wanted to borrow my sunglasses.  I told them (at least 3 times) that my sunglasses were not magic and that they did not give me x-ray vision.

Our server was particularly pushy, however, and wouldn’t give up. 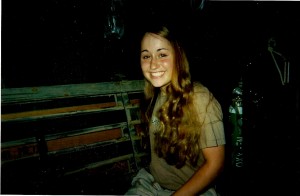 “Her” was a 19-year-old redheaded medic from outside Little Rock; her name was Lacy. According to the list tacked inside the plywood door to our outhouse, she was the #2 most attractive female soldier working at the Combat Support Hospital.

Me (shouting): “There’s no need to bother, she ain’t wearing any panties!”

This made the server blush and the group of male restaurant patrons laugh hystercially.  Most importantly, they left me the hell alone long enough to finish my meal.
——————————————————————————-
More funny blogs found at humor-blogs!