As anyone who stands to pee knows, the #1-ranked team in the country, where I was a third-generation graduate, played an important game Saturday against another ranked opponent that determined the SEC West.  I had a few friends over to watch.  We weren’t paying attention to the toddler.  Apparently, she meandered over to the recycling can, picked up a discarded bottle, and went to town.  And someone took a picture with her cellphone. 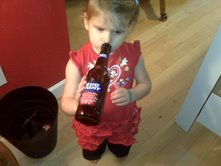 I know placing a bottle in front of your kid and taking a picture is clichéd and not really all that funny.  But this one wasn’t staged, which, I think, makes it both better and worse.

———————
Instead of calling DFCS, check out these humorous blogs!