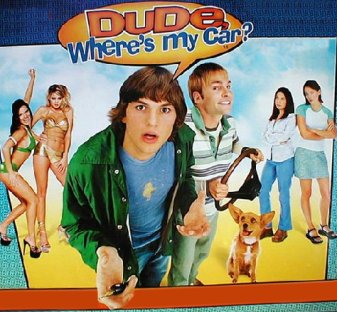 Ever since Toyota ran commercials with some of its customers taking their cars over 200k miles in the ’80s, I’ve thought it would be nice to hit the bicentenniel (but with a nicer car). A few years ago, I took a 1987 Mercedes 190E to 187,500 miles. I was almost to 200,000. I dropped it off at PepBoys to get something fixed, and one of the employees got mad at his girlfriend, downed some Pepe Lopez tequila, and took off in my car until he crashed it a few miles north of the store. The cops actually asked if I wanted to press charges. “Are you kidding? This guy stole and crashed my car! And he left his shitty tequila bottle fragments all over my interior. I want him hanged by his shorthairs and struck by blindfolded children with sticks until he vomits!” So now I have the car I bought with part of the insurance money from the 190E, and I’m once again trying to reach the elusive 200k point. Thus, I’m religious about the service appointments every 5000 miles.

This morning, I took my car in for its 85,000-mile service, which, I thought, would mean an oil change. I got a little frustrated at the outset, because they refused to honor an Acura coupon at a Honda dealership with the same proper noun on its sign. I used the, “well, they honored it 10,000 miles ago…before I went to Iraq!” The guy said, “It’s a separate company. Sorry.”  Dejected, I saw in the waiting area. I read the entire Wall Street Journal, the USA Today, and some crinkled People magazine with spoiled kids on its cover. Over two hours passed. I became frustated again. I walked into the service area–where I’m not allowed–to see if my car was one of the ones on jacks 10 feet in the air. It wasn’t, but I did get the service manager’s attention, so he ran over to me to see what was the problem. My car magically appeared a few seconds later. However, when I approached it after paying $100 more than I’d anticipated for the extra transmission fluid flush, a little Hispanic man started driving away in it. I had visions of the Pep Boys employee and his Pepe Lopez bottle. “Hey! What the f*ck are you doing?! Get back here!” I ran after my car for 50 yards or so, slapped the trunk lid, and got his attention. He put it in “park” and got out, looking a bit embarassed. “The lady with car behind your needed to go…”  I then became aware of the 30+ service technicians and customers staring at the asshole who cussed at the little man driving his car out of the way.  “Maybe you should go to Acura dealer next time…” he stammered.