Among the pages of captioned color photographs from my 2003 deployment is one that sticks out.  There’s a woman in uniform, not unlike every other picture I have of persons in Iraq.  But then there’s this guy.  He has no BDU t-shirt or DCU pants; he’s in a white cotton button up with rolled sleeves and blue jeans. He’s sitting on a dusty cot next to our tent, his arms out, his lips pursed mid-sentence, and he’s smiling. He’s holding a shawarma wrapped in plastic he’s brought from his home to give us a break from MREs under our camouflage netting-covered “porch” where we shared lunch every day.

Muhammad was our translator. His father and uncle had been killed by the defeated regime, and he was supporting his siblings and cousins with the $10/day and MREs the Army gave him in exchange for helping us communicate with the guys making $1/day who filled sand bags and cleaned our outhouse or the guys stuffing canisters with mortars trying to kill us.  Muhammad was important.

Most of the soldiers assigned to the area stayed away from the young Iraqi, but I found him fascinating.  I learned how he was taken off by henchmen for being too sick to stand when one of Saddam Hussein’s sons passed on the street, but they felt sorry for him a few minutes later and tossed him out of the back seat just down the road.  I’d ask him the questions I was sure I wasn’t supposed to ask, like about Islam, terrorism, and the chemical weapons drums we’d found not far away.

During one of our many shared meals, I asked him this:

That conversation helped me keep my head up for the months that followed while in country in ’03, the years that followed when everyone on TV spoke of the invasion’s being in vain, and the months comprising my second trip to Iraq in ’07.  An Emancipation Proclamation it was not, but it was the motivation I needed to feel good about the time I spent away from home, a family, and the semblance of normalcy a life here gives in comparison.

Last summer, I went to Washington for a week of annual training in the form of 8 hours a day of briefings and powerpoint slides.  At one of the morning breaks, I approached a Major who’d mentioned during one of the talks that he’d been to Camp Anaconda in 2003.

Me:  You were there in ’03?
Him:  Yeah.  You been there too?
Me:  I have…got there in May ’03 after a couple months in Kuwait.  When did you arrive?
Him:  Summer…late July or early August.
Me:  Holy shit…are you from Texas?
Him:  Yeah, were you part of the team from Tennessee?
Me:  You relieved me!  Wow…I’ve never been happier to see someone as I was to see you get off the plane to signal my getting to go home.
Him:  You look really different…
Me:  I was 27.  I had a shaved head, hadn’t started practicing law yet, and didn’t have children.
Him:
Me:  Hey, was there a translator there named Muhammad?  Young guy…looked sorta like a tanned Tom Cruise?
Him: Yeah, I remember Muhammad…smart kid!  They, uh…they actually…killed him.
Me:  What?  Who?
Him:  The insurgents…they found out he was helping us and…
Me:
Him:  Were you…
Me:  I… gotta take… (pretended cellphone was vibrating and walked outside).

Thank you for your brave service to our countries, Muhammad.  Happy Veterans Day. 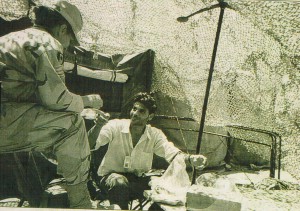