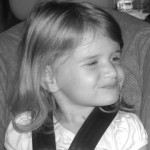 Tonight after bath time, I suggested that I make up a story instead of relying on the same old shit about large red dogs, princesses, queens who don’t march in Pride, or brown bears with white girl intruders.  Maddie agreed.

She smiled.  I smiled.  I suggested she go to bed, so I could have my nightly bourbon and check out all my new Twitter Pornbots. Instead:

Maddie:  Daddy, I want to read a story, too!
Me:  You mean “tell” a story?
Maddie:  Uh huh.
Me:  But it’s time for you to go to bed…
Maddie:  It’s about SUPER MADDIE!
Me:  Are you about to tell the story I just told, but substituting yourself in the dog’s place?  Because that’s pathetic.
Maddie:  Once upon a time, Supper Maddie flew in the sky and RESCUED Winnie and cats and Kal-El*!
Me:  Wow.  Super Maddie, huh?  How original.
Maddie:  And she would fly and have a cape and she was SUPER!
Me:  Super, huh?
Maddie:  And Winnie was RESCUED and babies were RESCUED and everybody was happy.  The End.
Me:  That was awful, Maddie.
Maddie:
Me:  Okay, time for bed.  Maybe tomorrow, you’ll use the right side of your brain to create a story instead of copying the dog.
Maddie:
Me:  See you in the morning.
Maddie:  Daddy?
Me:  Yeah?
Maddie:  Let’s read “Snow White” tomorrow.
Me:  Deal.

*Our neighbors named their son Kal-El.  I’m not sure if they love Nicholas Cage or Superman, but there it is, just the same.

Leave a Reply to Keyona Cancel