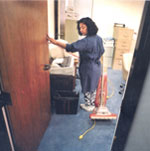 So, today was my last day of secure employment. I had a BBQ buffet lunch at the Marriott sponsored by our head partner, went over the cases I’m handing over to others, and packed.  Then I loaded the wife’s minivan full of my shit and headed to an empty office in a building in Buckhead to jettison said shit (after dragging out the dentist’s chair and light left by a previous tenant).

But first, I had some unfinished business. I felt it imperative that I have closure with the turd burglar–the short, stocky female janitor who, every day for two years, burst into the restroom at precisely the time in which I was using it–9:30am. I found her in the hallway leading to the can. I stopped her.

Me:  “So, today’s my last day at this office.  You won’t be interrupting me any more in the mornings.”

Me:  “It’s….it’s just…nevermind.  See you around, turd burglar.  You won’t have the Muskrat to kick around any more.”

And then I put one of my new business cards on top of everyone’s keyboard, left my key card on my old desk, and walked out into the unknown.

Leave a Reply to WeaselMomma Cancel